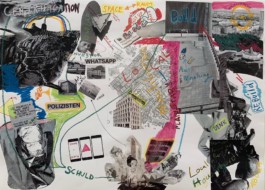 Work made by students of the Bern University of the Arts HKB during a BLOCC workshop in November 2018.

The first two-year cycle of the restructured Sommerakademie Paul Klee 2017-19 is coming to an end and we would like to invite you to the closing event 25 April 2019 in Bern, where BLOCC will launch their new educational platform.

BLOCC (Building Leverage Over Creative Capitalism) derives from ‘block’: a component of building material, a neighborhood or partition within a city, or a deliberate obstruction of an opponent's intentions. It is an educational strategy that seeks to tackle the relationship between Contemporary Art and gentrification. Through generic infrastructures, rationalized public spaces, and homogenized public spheres, late capitalism produces a global monoculture which undermines the city as a social form. How, then, to confront a single planetary development alongside its many local manifestations? How, in other words, to forge international alliances when our legitimacy, and working knowledge stem from particular neighborhood materialities? By way of continuous erasure of its boundaries into life, the field we know today as Contemporary Art holds a strong enmity to determining its own conventions and rules of inclusion. Yet, how do we survive complicity in a moment when developers, city planners, and non-profits are instrumentalizing artists who participate in the violent process of displacement? Does Contemporary Art even have the capacity to catalyze, exploit, amplify, or capitalize on the phenomenon of gentrification?

During this web launch BLOCC will present their position - a system of learning, a chimera. It tackles the relationship between Contemporary Art and gentrification by building on an initial curriculum - the BLOCC curriculum - tapping into and inviting local possibilities and struggles. The system reflects a new way of teaching, templates are introduced from afar, adapted to any setting, and remain open-ended as the process builds. As the project teaches and learns from collective experience, its form crystalizes differently in various environments. The idea is to alter Contemporary Art’s relation to gentrification through education, one generation at a time.

BLOCC’s public web launch will take place on Thursday, 25 April 2019 at 6 p.m. at the Grand Palais (Thunstrasse 3 in Bern) where BLOCC will present their joint educational platform. The Fellows will discuss their educational strategies, experiences, and future plans for BLOCC with artistic director Tirdad Zolghadr.

We hope to see you there!